UGRTerm, the Spanish-English language resource that was officially launched in March 2018, contains the official nomenclature of the University of Granada (UGR) and a considerable number of terms and expressions related to research and higher education. It also features terminology from cross-cutting spheres such as the social sciences and humanities; law; economics and statistics; information, communication and public events; public infrastructure; and politics, government and administration. The resource now contains over 40,000 terms in English and Spanish.

A pioneering database in the international university context, UGRTerm is designed to facilitate the standardisation and homogenisation of the official nomenclature in use at the UGR, both in Spanish and English. It also aims to become a support tool for all members of the university community (teaching and research staff, administrative and support staff, and students) who draft and translate university documents on a regular basis.

UGRTerm has not been conceived as a comprehensive dictionary per se, but rather as a living resource that is continually updated. Since its launch, the official UGR nomenclature related to new university bodies, activities, courses, etc. has been incorporated, alongside terminology which is frequently used in the higher education and research sectors (e.g. teaching posts and learning and research processes). Moreover, terminology which arises in the process of translating contents such as academic and research reports, university websites, international agreements, etc. is also regularly added to the database. 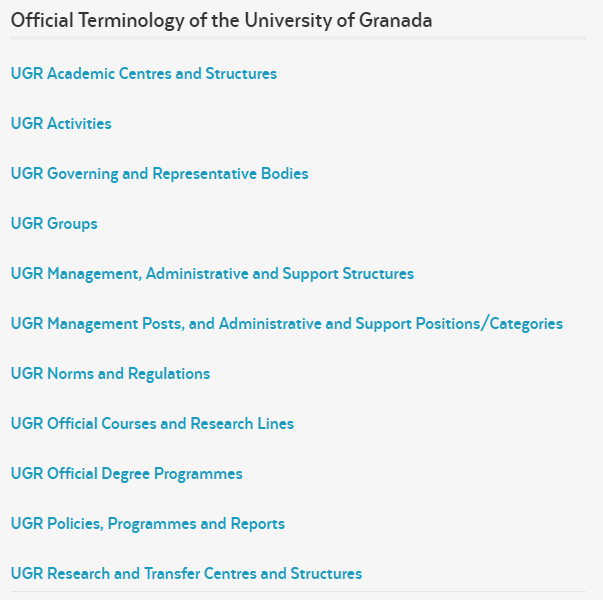 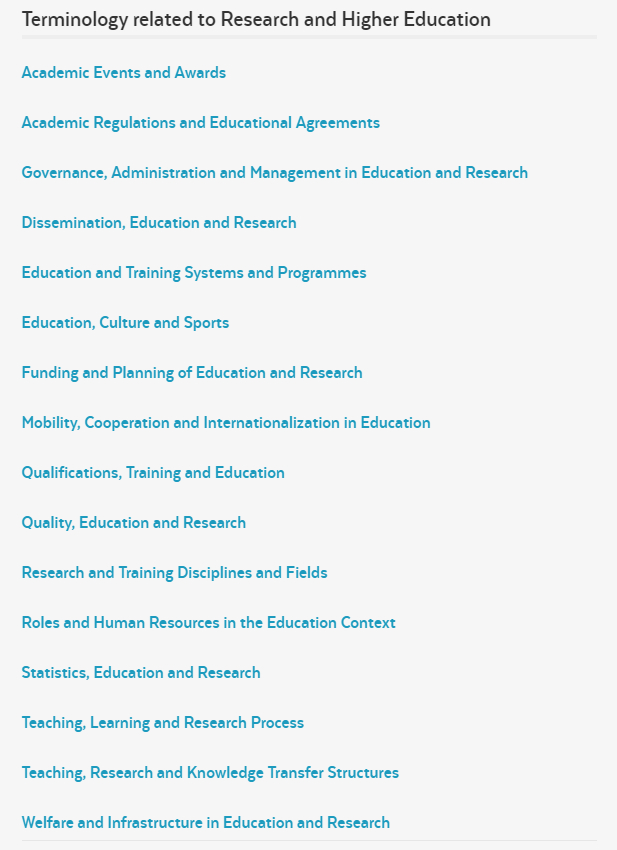 Translation of the main teaching posts and positions at the UGR

The terms related to the most common teaching posts at the University of Granada and other Spanish public universities have also been incorporated into the database. The task of translating these positions into English poses significant challenges because the terms employed across different higher education systems vary greatly (even among different universities within the UK or the US).

Consequently, given that there is no straightforward equivalence for academic positions among these different systems, the most common posts at UK (British English) and US (North American English) universities, as well as those used in EU documents (EU English), have been employed as benchmarks. In light of the UGR’s strategic context, precedence has been given to British English and EU English (usage status: Official/standardized) and, where necessary, North American terminology is admitted (usage status: Admitted).

In order to facilitate this process and ensure accuracy, common ground was established in several key areas such as academic rank and the teaching and research duties associated with each position. Additionally, where possible and appropriate, the academic title in Spanish has been maintained in the English translation in order to preserve its specific identity and make it easier to identify. The English translations of Profesor/a Titular de Universidad and Profesor/a Catedrático/a de Universidad provide illustrative examples of this feature. 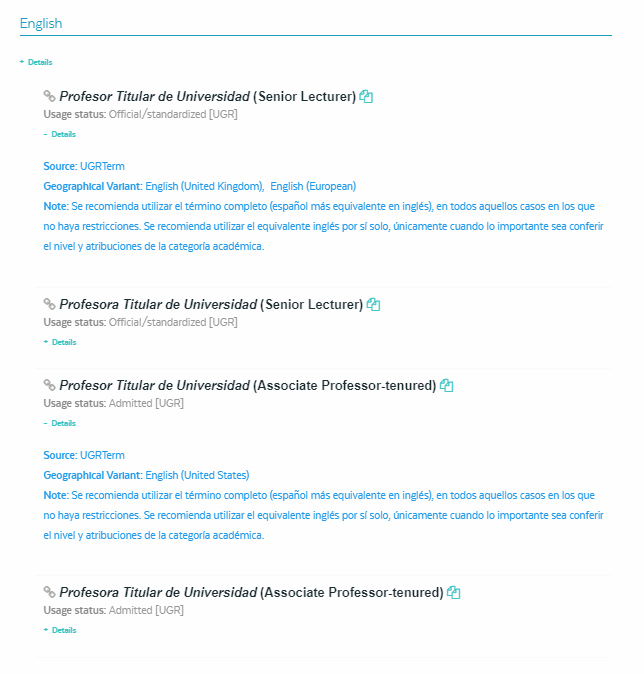 UGRTerm is a user-friendly resource. However, for additional support a user guide has also been made available at: https://ugrterm.ugr.es/ayuda/

Furthermore, training sessions are currently being delivered for diverse groups at the UGR, including teaching and research staff, administrative and support staff, and interns.