A major international study has successfully developed a genetic map of the Iberian Peninsula spanning the last 8,000 years. The research was conducted by a team co-led by Iñigo Olalde and David Reich (both of Harvard University) and Carles Lalueza-Fox (Spanish National Research Council, CSIC, Barcelona). Also on the team was Juan Manuel Jiménez Arenas of the Department of Prehistory and Archaeology, University of Granada (Spain).

The study, published recently in the renowned journal Science, analysed the genomes of 271 inhabitants of the Peninsula from different periods in history and compared these with data gathered in previous published studies examining 1,107 ancient and 2,862 modern subjects. The Archaeological Museum of Granada, whose director, Isidro J. Toro Moyano, also participated in the study, is home to the remains of 42 of the individuals analysed in this research.

The results provide an unprecedented insight into the transformation of the Iberian population through the different historical and prehistoric ages.

The genetic substrate of hunter-gatherers

Following the expansion of the first modern humans across the Iberian Peninsula, more than 40,000 years ago, the first major genetic and population shift took place, with the arrival of the production economy. At Carigüela cave (in Piñar, Granada Province), the researchers sequenced the genome of an individual whose haplotype (variant) presents a clear substrate of hunter-gatherer (Epipaleolithic) populations. Yet no material evidence of the cultural Epipaleolithic period has been found in the cave, to date. This opens up potential new avenues of research, as it could indicate that individuals or ancestral groups adopted (and adapted to) the cultural and social innovations of the Neolithic.

Replacement of the male population in the Bronze Age

The arrival of groups descended from shepherds from the Eastern Europe steppes between 4,000 and 4,500 years ago led to the replacement of approximately 40% of the local population—and specifically, almost 100% of the male population. “The genetic results are very clear on this point. During a period of perhaps 400 years, the lineages of the Y chromosome that had been present up until then in Copper-Age Iberia were progressively, and almost entirely, replaced by a lineage of steppe descendants: R1b-M269”, explains Carles Lalueza-Fox of the Institute of Evolutionary Biology (CSIC and Pompeu Fabra University joint centre).

However, the researchers were in for a surprise when it came to the south of the Iberian Peninsula. It was found to be the region least affected by this influx of men from the steppes. In fact, one characteristic revealed by the archaeological data is that many individuals from the Bronze Age were buried in megaliths—in tombs typical of the Copper Age. One such tomb in Panoría (Darro, Granada), was previously excavated by the team led by Gonzalo Aranda and Margarita Sánchez Romero, both from the Department of Prehistory and Archaeology of the University of Granada.

Another of the study’s key conclusions is that the genetics of the modern-day Basque people has barely changed since the Iron Age (about 3,000 years ago). Contrary to some theories claiming that the Basques are descended from Mesolithic hunters or the first farmers who inhabited the Iberian Peninsula, this study shows that the genetic influence of the steppes also reached as far as the Basque Country— in fact, the Basques were found to have one of the highest frequencies of chromosome Y R1b. However, later migrations such as those of the Romans, the Greeks, or the Muslims had scant genetic influence on this population.

The distribution of the genetic flow from Africa to the Peninsula was found to date much further back than previous studies have claimed. The researchers identified a lone individual with North African DNA, dated to about 4,000 years ago, at the Camino de las Yeseras site in Madrid—at the heart of the Iberian Peninsula. They also found a grandson of an African emigrant at the Loma del Puerco site in Cadiz. Both individuals presented a high proportion of sub-Saharan ancestry. However, these are exceptional, sporadic African connections that left only a negligible genetic mark on the Iberian populations of the Copper and Bronze Ages.

The results also suggest that there was a North African gene flow in the south-eastern part of the Peninsula in Punic and Roman times, long before Muslims arrived in the Peninsula in the 8th Century.

Analysis of the genetic map also revealed profound population changes in the Iberian Peninsula in more recent historical periods. The Mediterranean Sea, more than ever, acted as a unifying geographical and cultural element that connected previously-isolated populations. This led to an unprecedented population flow that significantly altered the genetic structure of the Iberian Peninsula—first, with the Phoenicians and Greeks, and later with the Punics (Carthaginians) and other North African populations. In a striking example of the accuracy of the genetic analysis undertaken, at the Necropolis site in Einstein Square, Granada, the presence of two brothers was confirmed.

Granada’s Roman sites point to the major significance of North African ancestry and, to a lesser extent, Eastern ancestry. The fall of the Roman Empire did not trigger any large-scale replacement of the population, unlike in other locations such as north-eastern Spain (present-day Catalonia). Indeed, the findings of this study question the impact of barbarian migrations (invasions) and demonstrate the continuity of the population with a North African genetic substrate and the appearance of individuals of Anatolian origin (now Turkey). The latter was likely due to a little-known historical episode: the Recuperatio Imperii. In the 6th Century AD, Emperor Justinian I mounted a military campaign to recover the territories occupied by Central European peoples. Troops under Praetorian prefect Liberius occupied only a small strip stretching from southern Hispania to Carthage Nova.

The arrival of Islamic populations in 711 AD blended the Anatolian component with North African and Eastern influences. Indeed, over the course of 900 years, the population of the southern Iberian Peninsula established deep North African roots that lasted until the final expulsion of the Moors in 1609. But the Kingdom of Granada also had a sub-Saharan population, as illustrated by the case of two individuals buried in the Necropolis of Torna Alta (Alquería de Mondújar, Lecrin Valley) and by the land and property records for various locations in Granada province.

As this study extends to more recent historical periods, it has revealed important links between the genetic evidence and written sources—although there is still much work to be done, and many mysteries yet to be solved. 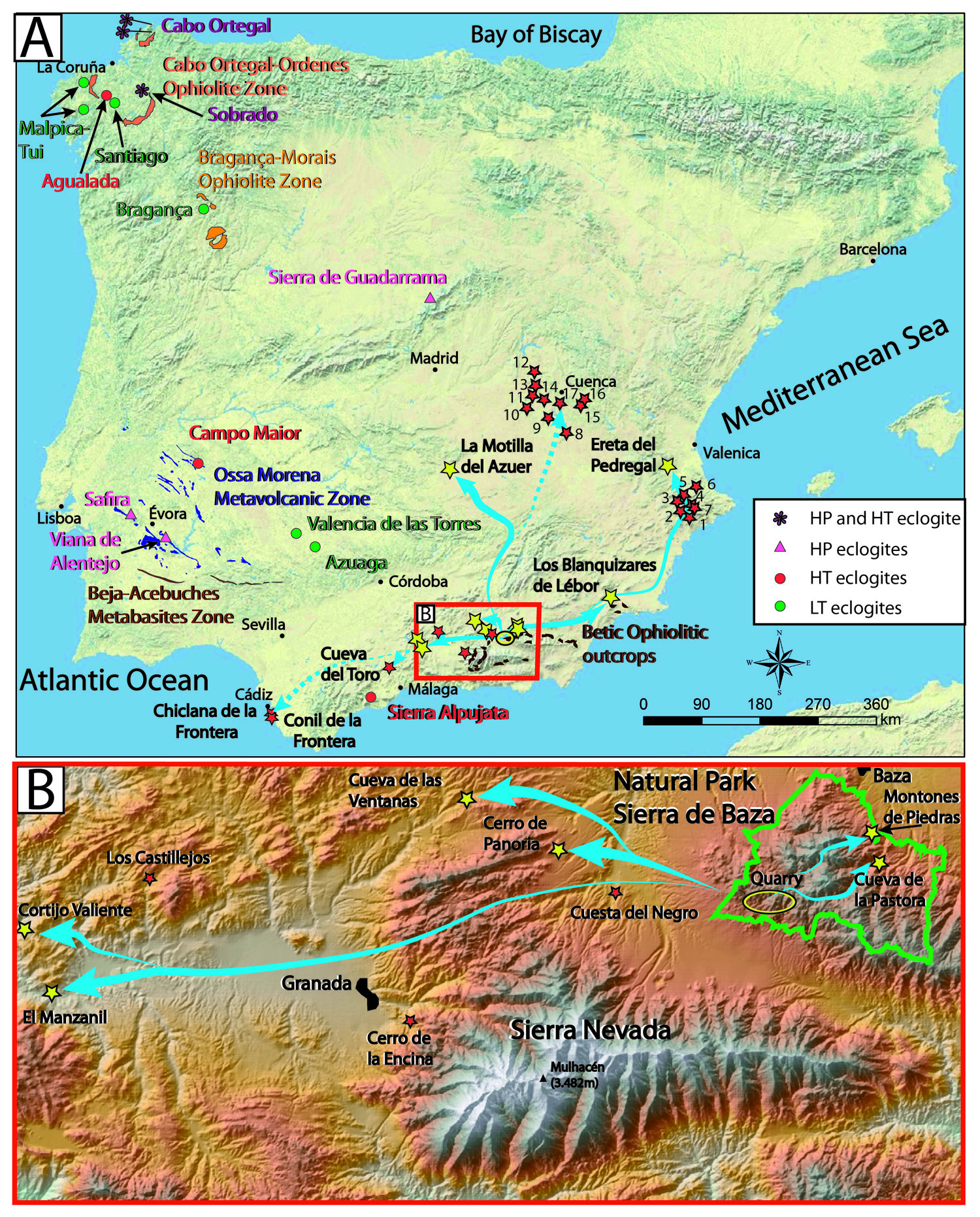 Department of Prehistory and Archaeology